With 500 days to go until UEFA Women’s EURO 2021 kicks off in England, The FA has today released the full match schedule – which includes confirmation that Milton Keynes Dons’ Stadium MK will host four matches including a semi-final on 28 July – in what promises to be a record-breaking edition of the European tournament next summer.

It was also revealed that England are to play the opening match at Old Trafford on 7 July 2021, with Manchester United’s iconic 74,879 capacity venue offering the host nation the opportunity to break the attendance record for a UEFA Women’s EURO in its opening fixture. Wembley Stadium – with a capacity of 90,000 – will host the showpiece final on 1 August, meaning the venue is hosting back-to-back men’s and women’s European Championship finals in 2020 and 2021.

Stadium MK is one of ten grounds which will stage UEFA Women’s EURO 2021 matches next summer. As tournament hosts, Phil Neville’s Lionesses qualify automatically and after beginning their campaign at Old Trafford, will complete their group stage fixtures in front of home crowds at a further two Premier League venues – Brighton & Hove’s Community Stadium and St. Mary’s Stadium in Southampton.

Now in its 13th edition, the UEFA Women’s EURO 2021 is poised to be the biggest women’s EURO to date, with over 700,000 tickets available to fans and extensive coverage of every game of the tournament available on free-to-air television, radio and online. Fans will be able to see some of the world’s best players in action on home soil as 31 matches are played across 26 days of competition.

To register for tickets, as well as tournament news, competitions and volunteering opportunities, please visit TheFA.com/WEURO2021. 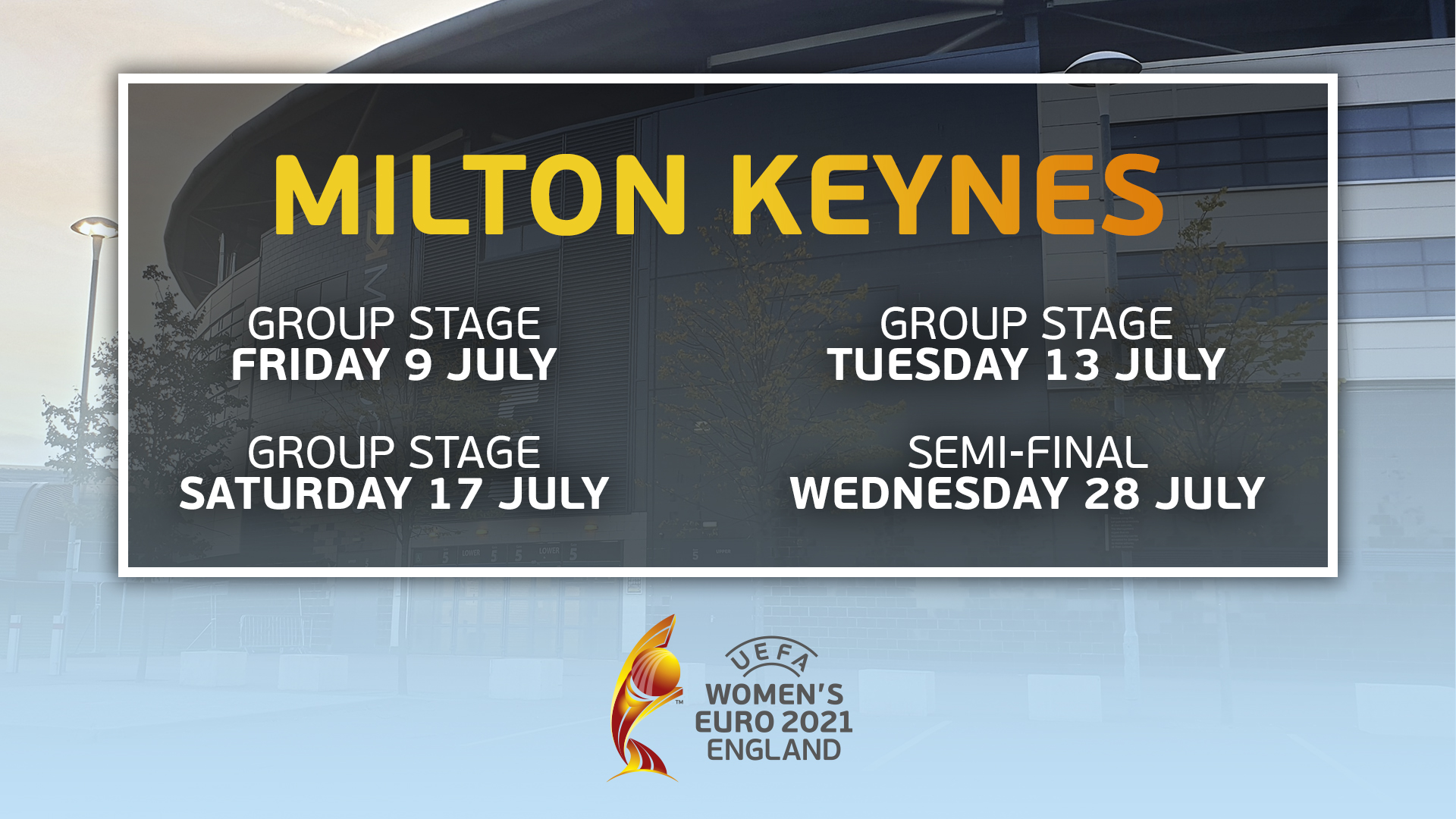 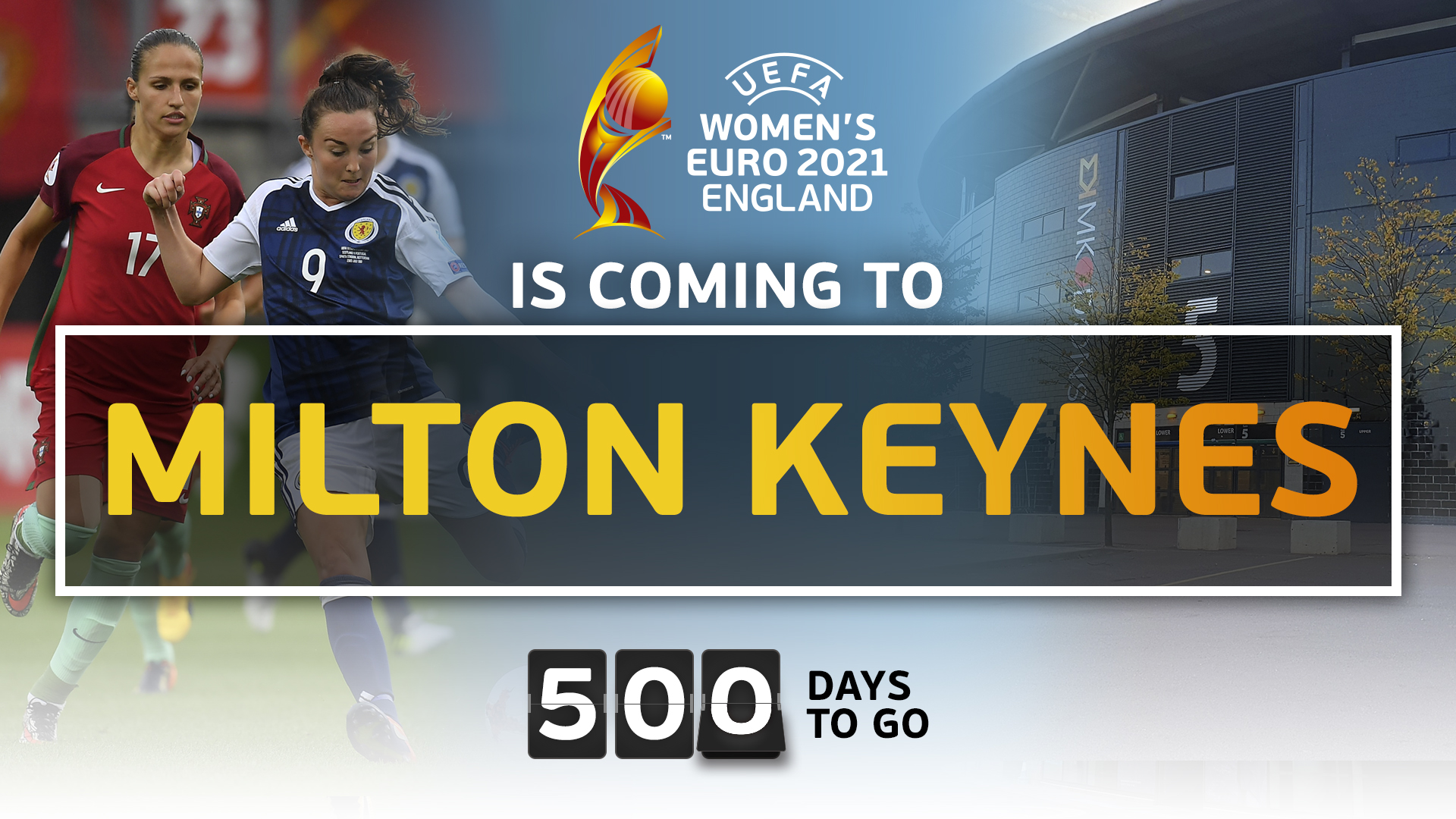 Pete Winkelman, Chairman of MK Dons Football Club said:“We are incredibly proud and excited that Stadium MK will be playing its part in UEFA Women’s EURO 2021, including hosting a semi final here on Wednesday 28 July. We truly can’t wait to welcome players, staff and fans, from all across Europe, to Milton Keynes next summer.”

Dame Sue Campbell, The FA’s Director of Women’s Football and UEFA Women’s EURO 2021 Board Member said: “The confirmation of Old Trafford as the iconic venue for England’s opening game shows just how big our aspirations for UEFA Women’s EURO 2021 are. As a proud host nation, by staging matches at ten fantastic grounds across the country, our aim is not only to deliver a record-breaking tournament, but also to ensure that it provides a tangible legacy in terms of growing the women’s game. By inspiring fans both at home and abroad, and by providing playing opportunities to girls in every school across the country, I am confident that we can do exactly that.”

Phil Neville, England Women’s Head Coach said: "It doesn’t get much bigger than managing your country at a home EURO, and it is set to be a special summer as we prepare to host this wonderful competition. Old Trafford has a special place in my heart, and is also one of the country’s most iconic football grounds, so I’m looking forward to kicking off our WEURO2021 campaign in Manchester. I can’t wait to then take our Lionesses to Southampton and Brighton, as the tournament offers fans across the country the chance to watch the elite women’s game on home turf next summer.”