MK Dons Women welcome Portsmouth for their first game at Stadium MK of 2023.

On Sunday 29th January, the Dons make their long awaited return to the usual home of Stadium MK having not played a league match at Stadium MK since November.

Charlie Bill and co ended the 2021/22 campaign in style going unbeaten in 6 of the final 8 games at Stadium MK, ultimately resulting in survival in the FAWNL. The Dons have not looked back since and have seen an impressive start in the first half of the 2022/23 season.

MK Dons Women have a record number of Season Ticket holders on board for the 2022/23 season following the success of the Lionesses and the UEFA Women’s EURO 2023 at Stadium MK in July. With a big game against Portsmouth coming up, this is a great opportunity to get your women’s football fix in the first game at Stadium MK of 2023.

Dons Number 4, Gemma Biggadike, spoke of the importance of playing at Stadium MK for the team “Being back at Stadium MK is always a privilege. As a whole team, we never take for granted being given the opportunity to showcase what we love in such a prolific, professional arena.

Also, it drives the feeling that we really are one club. It makes you feel just that little bit prouder to be wearing the MK Dons shirt. Game day excitement is always at its highest too!”

The excitement is building as Head Coach, Charlie Bill, looks ahead to 29th January “We can’t wait to be back at Stadium MK for the Portsmouth game, it what will be such a huge occasion. We have already had two incredible games at Stadium MK this season, We can’t wait to showcase all the good areas we have been showing since the start of the season, coming up against another team pushing for promotion to the Championship.

Bill mentioned the importance of the support so far this season “Both home & away we hear our fans driving us on throughout the 90 minutes, our two league games at the stadium so far have shown with over 600 supporters for both games. Were so excited to be back playing at Stadium MK & we hope it is another occasion we can show our progress.” 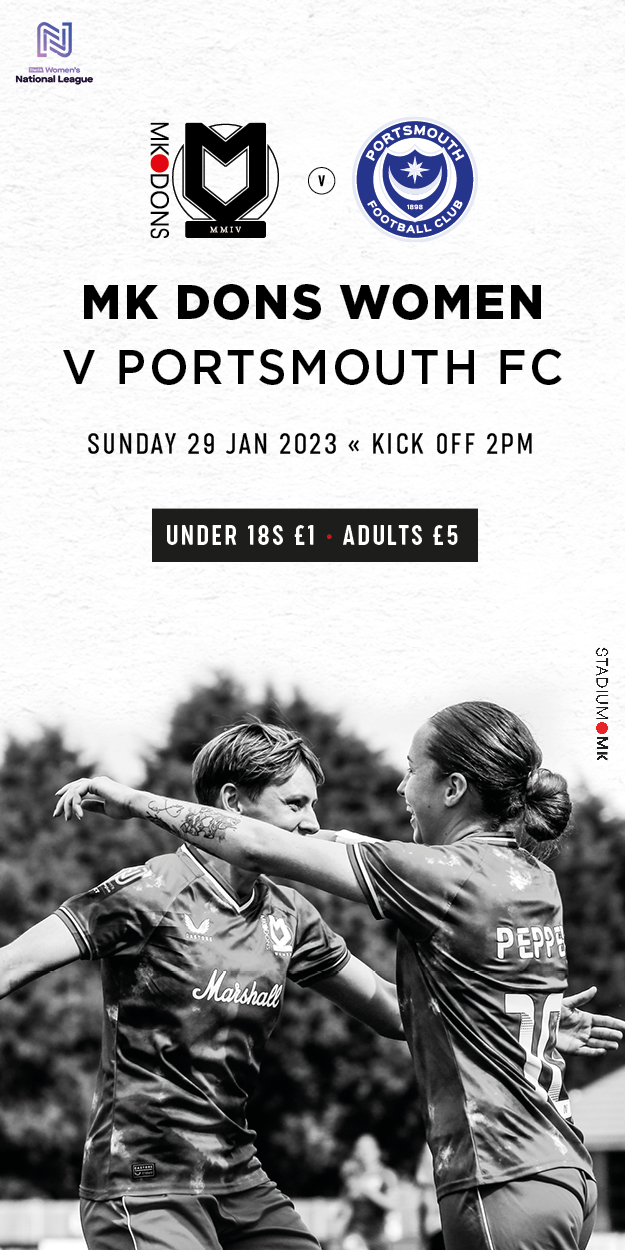