MK Dons Ladies can look forward to another final after a thrilling 4-3 win over Liverpool Feds in the FAWNL Plate Semi-Final, which took place at Stadium MK yesterday.

It was Liverpool Feds who had the best of the early stages with Carla Lee hitting the post for the away side during the opening minutes of the counter.

Shortly after, Jennifer Rogers dragged an effort wide from 25-yards.

Lead Cudone, who was looking dangerous on the right put in a dangerous cross into Liverpool Feds’ box – defender Abby Pope cleared.

The Dons didn’t have to wait much longer for their equaliser though as Cudone drew her side level with 23-minutes on the clock. Her alertness saw the forward pounce on a loose pass before striking past Pope. 1-1. 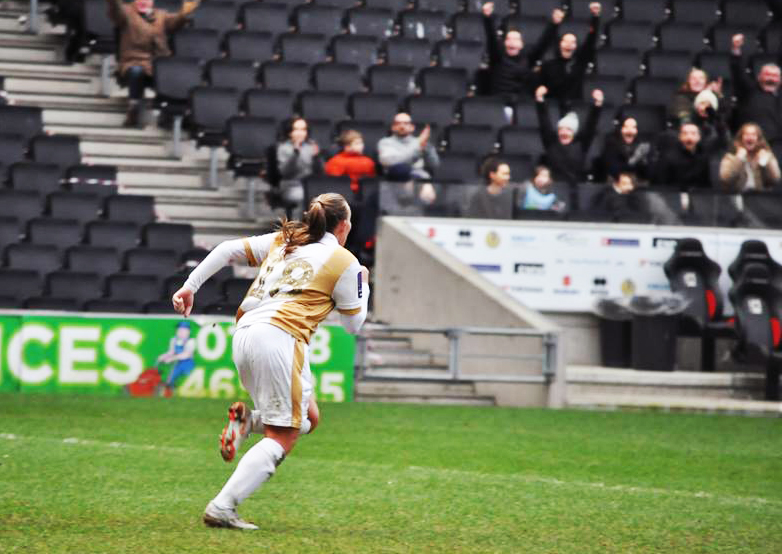 Evans and Bill’s side continued to push on, and soon after, they were given the chance to take the lead after Amy Gooderham was fouled inside the box. Captain Leanna Doyle stood up to the spot and coolly converted to give MK Dons the lead at half-time. 2-1.

After a back-and-forth start to the second-half, with both sides going close, it was Liverpool Feds who grabbed the next goal of the game.  A cross came in from the left and caused pandemonium in the penalty box, with the ball somehow making its way past Emma Kirby. 2-2. 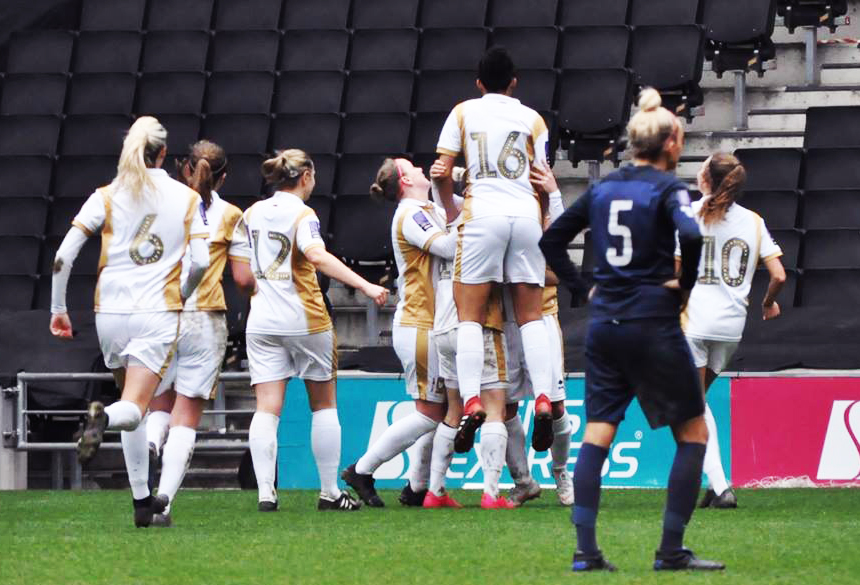 Both Kerry Newman and Leah Cudone went close to putting MK Dons through in normal time, however, with the scores level at the end of the 90 – the clash would go to extra-time.

With just six-minutes played in extra-time, Liverpool Feds were back in front. Devereaux was played in on goal by Mortimer and kept her composure to slot past Kirby. 2-3.

Almost immediately, Cudone drew Dons back level, but Pope was on hand to deny the striker.

The Dons didn’t have to wait much longer to find the net goal in the game though, with Farrow drawing the score level on 99-minutes. She kept her composure in front of goal to fire under Pope and into the back of the net. 3-3.

The game was won with 10-minutes left in extra-time as Farrow headed home in stunning from 8-yards out to put the Dons into the Final of the FAWNL Plate. 4-3.

Speaking after the full-time whistle, Bill said, “The Ladies showed fantastic resilience and character to come back from two losing positions in order to make the Final.

“We showed it in the Quarter-Final and now in the Semi-Final – I’m so proud of every single player.”

Owen Evans added, “It’s been a rollercoaster couple of weeks, playing extra-time twice in the competition within a matter of weeks.

“Every plater showed incredible character today and showed the desire to win – that’s all we ask for!”