The MK Dons family fun day sponsored by MK Dons Sport and Education Trust Principal Partner Brioche Pasquier is excited to bring a fun filled day for all the family in our Marshall Arena.

After a year out we open our doors on 20th November at our Marshall Arena for an afternoon of fun, games, and football. As MK Dons welcome Burton Albion for the football, Stadium MK also welcomes several other local businesses who bring activities for all, from inflatables to football skills you can expect plenty.

The fun starts at 12:30pm in Stadium MK’s Marshall Arena with reduced ticket prices at highly discounted rates. Adult tickets can be purchased from just £10, with Under-18s tickets costing just £1, and of course Under-12s go FREE as usual for all of MK Dons Sky Bet League One home fixtures.

In 2021 MK Dons are taking over the Marshall Arena alongside sponsor Brioche Pasquier, as the Young Dons Zone will be moved into the 5,000 capacity, 3,420M2 Space where there will be even more for your Young Don to enjoy. What’s more is the MKFM Pre-Match show will make its way to the Marshall Arena where the usual pre-match festivities and of course MK's biggest hits provided by MKFM Breakfast Show’s Darren and Lia.

The bars will be open, serving your pre-match drinks before you cheer on the Dons. Marshall Arena has even made space for relaxation as you enjoy the early Premier League kick off match as Leicester City take on Chelsea.

Tickets can be purchased from MK Dons Box Office HERE>> 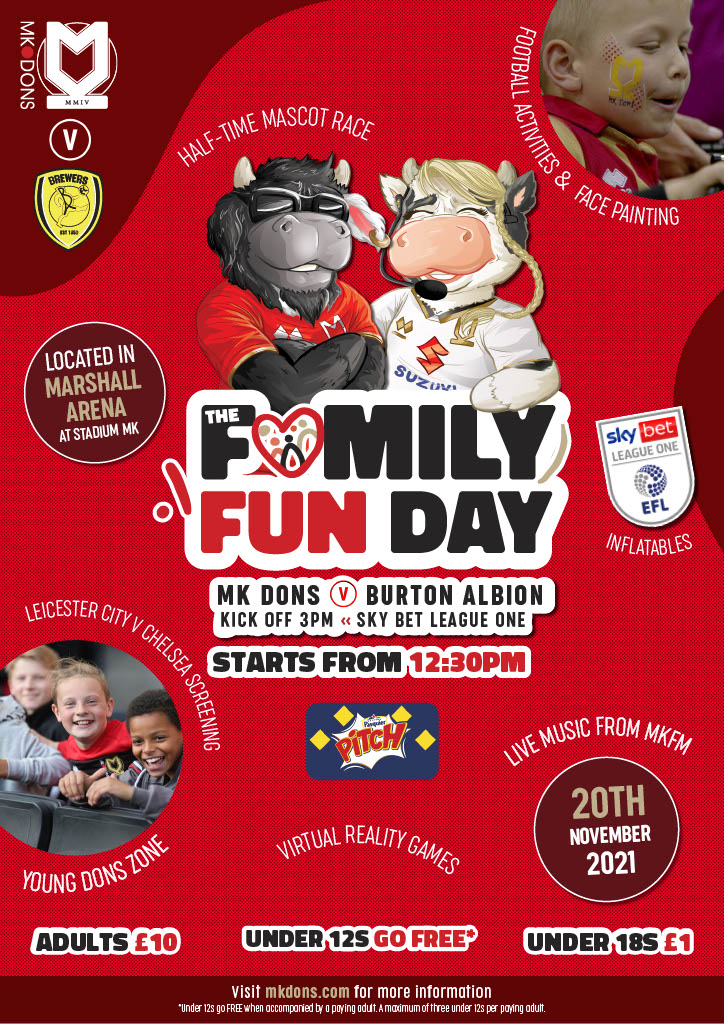